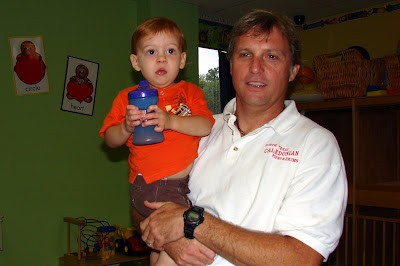 AJ started Mother's Day Out today. Tom stayed home from work today to be with me. I thought I would cry and be sad, but I really was OK. I'm sure having Tom with me made leaving AJ much easier. Tom, on the other hand, didn't do as well as I did. Tom was so nervous this morning that when we got to the church, Tom realized that he didn't have any shoes on. He had planned on wearing his flip flops and I guess he thought he had already put them in the car. He had to turn around and run home. It was hilarious! 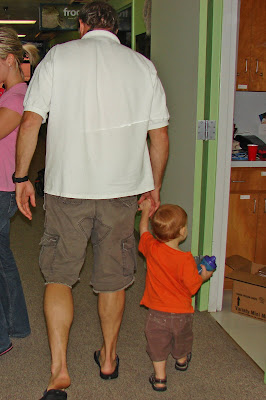 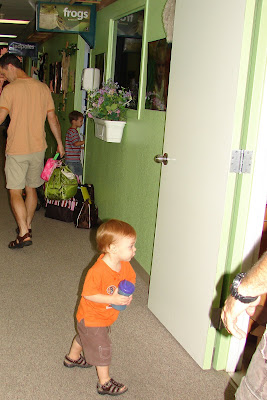 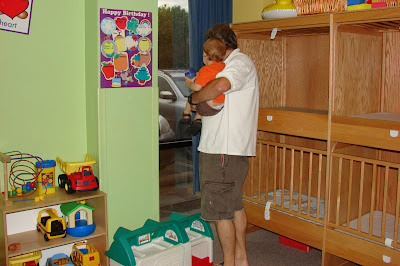 We had an orientation after we left AJ in his room. At one point, I looked at Tom and he had tears in his eyes. He said the sweetest thing. He said, "It gives me comfort to know that AJ is with you every day and I know he is taken care of, so this is a big deal for me." AJ's room has a one-way mirror so we could peek in on him before we left the church. He was doing fine, just whining intermittently. My friend Sami's daughter, Charli, is in Aleck class and that should make AJ's transition easier. 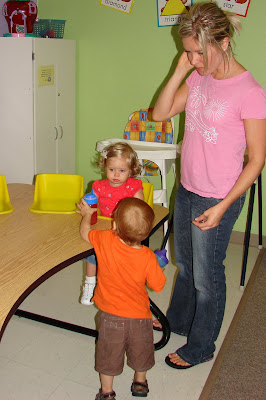 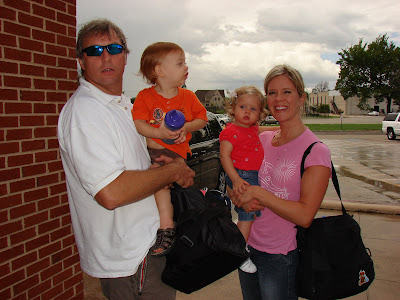 Tom and I had a wonderful day together. We drove out to Grapevine Lake to check out the marina. Tom wants to buy a sailboat. We had lunch at this adorable bakery in Grapevine. I don't think Tom and I have been to lunch alone since AJ was born, 17 months ago. It was wonderful!!! I even had time to squeeze in a nap.

When we picked AJ up, he started crying when he saw us. His teachers, Mrs. Kay and Mrs. Ginger, said he cried off and on during the day but overall he did good. He actually took a 1 hour 15 minute nap, which surprised me. Normally, AJ naps 2-3 hours, but I wasn't sure he would nap at all today. AJ is accustomed to sleeping in his crib, in a dark room, in silence. He must have been exhausted! As you can see in one of the pictures, they have several cribs built into the wall, which is where he slept. He was in such a good mood when we got home and he played by himself most of the remainder of the afternoon. After just spending 5 hours around different toddlers, AJ was making different vocalizations that he had never made. It is amazing how fast toddlers pick things up. He wasn't fussy, but I still put him to bed at 7:00, an hour earlier than normal since his nap was shorter than normal. He went to sleep without even a peep.

I am so glad he had a good day. He is such a big boy now. The time is wonderful but it goes too fast.
Brooke kept calling a little boy in her class Aleck. It was adorable. I think she has a crush on Aleck!

I'm so glad it went well for you guys. I know you were nervous. It will get easier each time and he will love going to play. Like you said, you can get work done during that time and be done with it so you can have the afternoons at home.
Love you all