First Broken Bone (of many, I'm sure!) 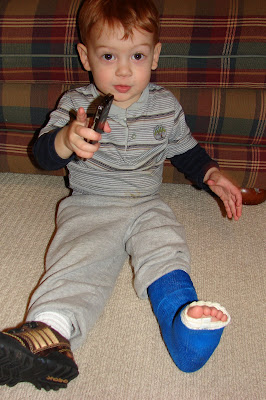 Aleck is fearless. He climbs and jumps off everything. Last Sunday, he was jumping off his toddler bed exclaiming "wheeeeee!" Of course, being the overprotective mother that I am, I made him stop. Have I told you about my strong-willed child? The minute I left the room, he proceeded to climb up and jump off his bead again. I then heard Aleck crying and found him laying on the floor beside his bed. He was holding his foot and wouldn't put weight on his left leg to walk. Off the the ER we went. The only thing that made it worse was the Cowboys game had JUST STARTED. Have I told you that my husband is a huge Cowboys' fan?
The ER put Aleck in a splint and sent us home with a follow-up appointment for Thursday, four days later. Oh yeah, and they said, "don't let him walk on it until he sees the orthopedic surgeon." HELLO!!!! How am I supposed to prevent a 20 month-old from walking on his foot if he so desires? It must have hurt to put weight on his foot, because Aleck never tried to walk. He quickly reverted back to crawling everywhere. I didn't lose it until Aleck crawled into the kitchen with his bowl in his hand asking for "more, please" when he ran out of Cheerios. I broke down in tears to see him so helpless and I realized how fortunate and blessed my family is to have our health.
Being the most wonderful husband in the world, Tom found a pediatric orthopedic surgeon who would see Aleck Monday afternoon. The orthopedic surgeon thinks Aleck has a hairline fracture in his first metatarsal, the bone that connects to your big toe. She said this type of fracture is common, and even called the "bunk bed fracture", because it frequently happens when kids jump off the top bunk. Aleck is in a cast for 10 days and we go back for another x-ray to determine how much longer he has to wear the cast. The cast hasn't slowed him down at all. He made Mrs. Ginger at Mother's Day Out so nervous on Tuesday. When I picked him up, she said, "he has been climbing and jumping off of everything."
That's my boy!

Poor sweet thing! I feel so sorry for him in his cast. I hope that Preston doesn't try to pull it off of him next week!!!!
I'm so very surprised with my dare devil child that we haven't paid a visit to the er.....yet.
Love you and give AJ big hugs from aunt Heather!

Wow, I didnt know he did that! That's crazy! Kinda sounds like me when my grandma found me at that age up on top of the fridge, eating the sugar bowl!