The Life of Poppo 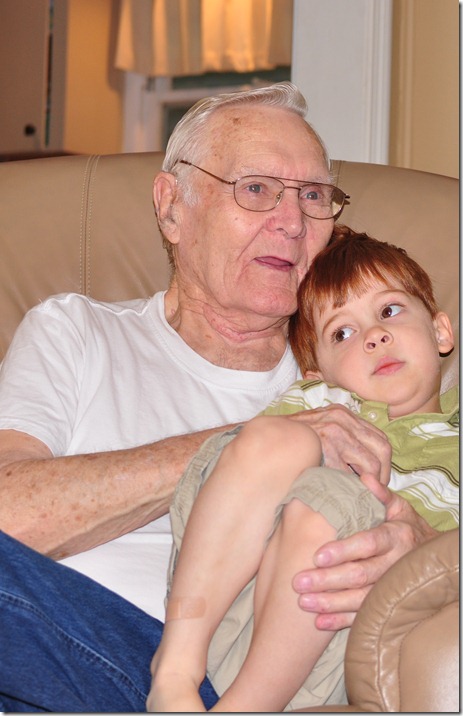 Poppo met Nana when he gave Nana’s father a ride home from work.  I’m not sure of the distance, but the ride was rather out of Poppo’s way.  When Poppo got home, he told his family that he had met the woman that he was going to marry.  Poppo and Nana were blessed with sixty-two years of marriage.

Poppo spent twenty three years in the Army and they lived in lots of places, including Germany and Alaska, but the would eventually call Oxford, Alabama home.  Early in their marriage, Poppo and Nana became friends with Kay and John Hawthorne, their neighbors in a trailer park, and have been close friends ever since.  In the early years, money was so tight that Nana and Mrs. Hawthorne would share a ham bone and pass it back and forth to season the beans.  Nana and Mrs. Hawthorne told stories about late night Rook games.  The kids would get so excited when it would get so late that the visiting family would just spend the night with the host family, with the kids sacked out on the living room floor.

The one tragic story in Poppo’s life was the loss of Gary, his firstborn son from a brain tumor.  It was especially difficult, because Poppo and Nana were separated during Gary’s hospitalizations.  Poppo was with Gary at the hospital, while Nana was at home with the other five kids.  This must have taken amazing courage and strength from both Poppo and Nana.

Somebody described Poppo as a man who showed mercy on others.  Nana and Poppo were involved in a serious car accident involving a drunk driver.  Nana’s hip was shattered.  The drunk driver, a young man, was killed in the accident.  Poppo knew the grief of losing a son.  When he could have easily been angry, Poppo grieved for the father of the drunk driver.

Poppo saw good in others and trusted others, even strangers.  Once, Poppo had a used car for sale.  Poppo let a stranger take the car for a test drive.  I suppose Poppo trusted the stranger because he left his own car in Poppo’s yard.  The stranger never returned with Poppo’s car.  When Nana and Poppo woke the next day, the stranger had returned in the night to retrieve his own car.  On more than one occasion, Poppo was taken advantage of by others, but that never tainted the way he viewed people.  Poppo always saw the good in people.

Poppo was a man of integrity who strived to live an honorable life.  Poppo was a member of First Baptist Church Oxford.  You could recognize him as a Christian man by the fruit of the Spirit seen in his life.

He was always concerned for his fellow man.  At one time, he worked as a car salesman.  He would come home from work troubled and he would confide in Nana that he just didn’t feel right about a sale he made that day.  He would say he sold a car to a couple and he just knew they couldn’t afford the monthly payment.

Poppo loved his grandkids.  Most of the grandkids have grown up and moved away, but Poppo still enjoyed spending time with Molly.  He also loved being around Aleck and Ella.  Smiling ear to ear, he would meet us in the driveway when we arrived for a visit.  With tears in his eyes, he would wave goodbye when we backed out of the driveway headed back to Texas.  Knowing Poppo’s health was declining, I would have tears in my eyes, wondering if this was going to be our last time to see Poppo.

Before his health declined after a stroke last April, Poppo would crawl down in the floor and play with Aleck and Ella.  He would say, “Hey, Cookie.”  That was his nickname for the kids.  Even in the last year, his eyes would light up when Aleck or Ella crawled up in his lap to rock.  The picture above is one of the last pictures I took of Aleck and Poppo together.  I took it the morning of Poppo’s 84th birthday.

Ella and Aleck loved their Poppo.  We had talked to Aleck about Poppo being sick.  As we were pulling into Nana’s house on Sunday, Aleck said, “Is Poppo better now?”  It broke my heart.  We told Aleck that Poppo was with Jesus now.  How much of that can a four year-old really understand?  Ella pointed to a picture over Nana’s couch and said, “Poppo”.  This was especially moving because Ella isn’t really talking much yet, but she knows who her Poppo is.

Poppo, in the life you lived, you left a wonderful legacy for your children and grandchildren.  I am a better person, and innumerably blessed for having known and loved you.

Beautifully said! I never met him but he must have been a wonderful person. So sorry for your loss!