Aleck lost his 3rd tooth today, the bottom left central incisor.  He was such a tough guy.  Earlier in the day he told me his tooth was loose.  Later, he walked in and said, "Mommy, I pulled my tooth."  He was such a brave little guy.  He misplaced his tooth before bedtime and was pretty upset because he was worried he wouldn't get any money without a tooth.  I wrote the tooth fairy a letter confirming that he in fact lost a tooth and reassured AJ that the Tooth Fairy would likely accept my note in place of his tooth.  Here's hoping the tooth fairy remembers to stop by before she goes to bed herself! 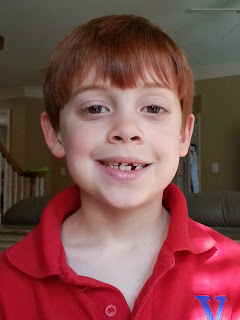 Awww! Aleck looks so adorable even with all his missing teeth. I do hope the tooth fairy remembered to drop by his room to hand out the note. Haha! The tooth fairy brings out such nostalgic memories. I remember bugging my own parents for every tooth that would fall off when I was younger, so I could receive notes as well. Those were the days. Haha! :)

Wow, that was so tough of him to pull out his own tooth by himself. He really deserved to be rewarded by his tooth fairy for exhibiting such bravery. I hope she didn’t forget to reward him before she went off to bed. Haha!

I remember bugging my own parents for every tooth that would fall off when I was younger, so I could receive notes as well edclinic